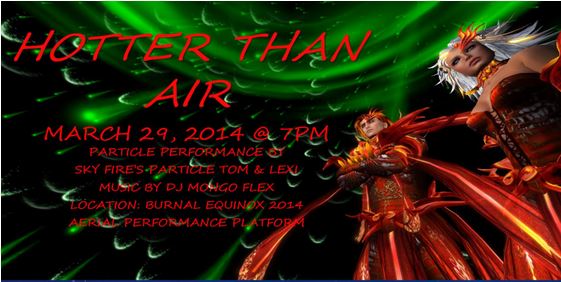 Green Gas on the Playa!

What Happens when You Mix… 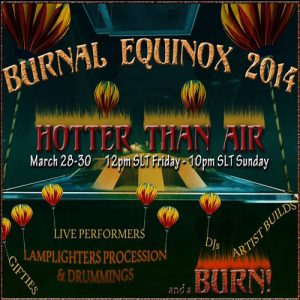 Join us from March 28th-30th in Second Life for a totally different playa experience!

At a time far into our future, the earth has been devastated by a multitude of scourges: harsh climate change, pollution, famine, and war. The playa is one of the last inhabitable places on earth, but toxic fumes cover the ground and rise to 100 meters. The only safe living environment is above the toxic gas at ground levels as the playa’s winds help purify the air at this altitude. Passing through this toxic ground zone is possible, but long term exposure can be fatal.

One redeeming factor of the toxin is that when it is captured, placed into a balloon and mixed with the correct proportion of playa dust, it takes on the form of a very powerful, lighter-than-air gas.  A single five-meter balloon can lift thousands of pounds into the air.  The gaseous concoction has been fondly named Fairy Dust.

Modern manufacturing no longer exists. Everyday items are scavenged from the remains of abandoned buildings.  Humans have learned to survive by creating with their own hands. They build platforms supported by balloons filled with Fairy Dust. These floating platforms are the hosts for a new civilization above the ground.  The citizens of this floating city commute by building lighter than air vehicles. They are powered by whatever means can be found and lifted into the air by balloons filled with the Fairy Dust

Residents have submitted their application to become citizens of this Playa City in the Sky and have been sanctioned to build on one of the 32x32x40 floating platforms.  They will build up their platforms with themes in mind.  We will all make our way to their platform to join them and celebrate at Burnal Equinox starting on March 28th at 12 pm SLT. 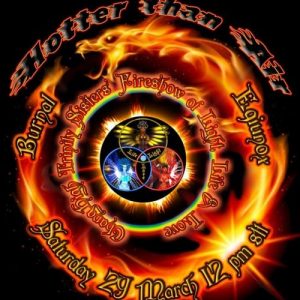 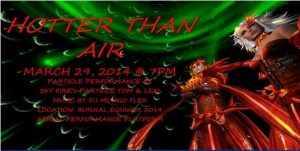 polkamatic feller,  burn The Past