What is Second Life?

Second Life is a 3D virtual world and online community. Since its public release release in 2003 its worldwide user base now counts in the millions with a concurrency of 40,000 at a time. One uses a free virtual world software program called a Viewer that merges 3d world graphics with a variety of ways for users to interact with each other. Second Life and other Viewer-based virtual worlds are entirely user-created and built from free tools that are included in the Viewer. The Viewer also has built-in import tools for 3D models from external software. All the landscaping, scenery, clothing, avatar customizations, etc., in the virtual world are created by the users.

BURN2 is the first sanctioned Burning Man regional in the virtual world. Burning Man has always had a presence in Second Life since its beginning, and BURN2 is the latest incarnation of Burning Man presence there. Today, BURN2 occupies a region in Second Life year-round called Deep Hole, with extra regions added to their virtual space during special events. It is run by a group that includes people involved directly with Burning Man, along with seasoned Second Life programmers and digital artists with a genuine interest in Burning Man.

The BURN2 community is a mix of those who attend real-life Burning Man as well as people from all over the world who may never have the opportunity to visit the real playa, but share a genuine interest in Burning Man. For many, BURN2 is their Burning Man experience. Together, we celebrate Burning Man culture in the unique environment of Second Life.

BURN2 activities are primarily event-based with each event having a planning stage, building stage, holding the event, then tearing down. Several small events are held each year, with the main event held in October. This event is a week long and echoes the Burning Man playa "look and feel" each year. This event, also referred to by the community as "OctoBurn" uses more virtual space and requires more planning and preparation.

BURN2 has many of the elements of the Burning Man event, including being set in a desert playa virtual environment, and the opportunity to create your own environment. BURN2 has many of the same organized groups such as Lamplighters, Fire Dancers, Rangers, a DMV complete with crazy art cars to drive around, and many talented artists who build and share their art with the community each year.

We welcome you to become part of our community!

Since it was formally established as a Regional in 2010, Burn2 has been holding several events a year. We have been collaborating with other Burner groups holding online events, and you are invited to come join us, participate as an avatar on our virtual Playa!

Burn2 is more than a regional: it is a community of individuals hailing from across the physical world.

Check out our YouTube channel to see what we've been doing! Then come back this page, read how to get your own avatar, download the viewer software, and prepare to get your mind BLOWN.

We are waiting on Deep Hole to say, "Welcome Home, Burner!"

Go to www.secondlife.com, pick a starter avatar and create your account.

But most seasoned users recommend instead to use a 3rd party viewer, called Firestorm:
http://www.firestormviewer.org/downloads/

When you enter Second Life with your avatar for the first time, you will arrive in an orientation area. Take some time to go through it; you will learn the basics of navigating in the virtual environment.

Second Life provides plenty of training for beginners and there are many resources. But if you know someone already familiar with the Viewer, an in-person demo can be a fast way to develop an understanding. You can also view the tutorial videos at the bottom of this page.

While Second Life is itself totally free to use and explore, there is an optional in-world currency called the Linden Dollar ($L) which you can purchase with real US dollars. The Linden Dollar can be used for buying optional non-free items either in-world or at their marketplace website. This might include such things as clothes/accessories, vehicles, land, and anything else you may desire.

Purchasing the in-world currency IS NOT REQUIRED as there are plenty of free items available, but buying Lindens can definitely enhance your overall experience in Second Life.

You will see an "address bar" up at the top of the Viewer screen, similar to what you would see in a web browser.

Copy and paste this address (called an SLURL) into that bar and hit enter:
http://maps.secondlife.com/secondlife/Burning%20Man-%20Deep%20Hole/177/32/25

That will take you directly to the virtual playa of BURN2!

SL: Second Life
RL: Real Life
Av, Avi or Avatar: Your In-World character
TP or Teleport: A direct teleport to/from a place in Second Life
LM or Landmark: A "bookmark" of a place or sim that is saved in your inventory. Using a saved LM will teleport you to that location.
SLURL: A landmark in url form.
Sim/Region: A square area of land which is 65,536 square meters (roughly 16 acres).
Parcel: A single divided part of that land
Rez: Bring something in-world from your inventory to use.
Boxed: Some things in Second Life are "boxed" meaning you must rez and open the box to copy its contents into your inventory.
Sandbox: An open area where you can rez or build items
Local: This refers to "Local" chat in which everyone near you can see your chat or can hear you if using voice
$L, L$ or Lindens: The in-world currency... such as L$50 or 50L
MP or Marketplace: Second Life's online Marketplace for shopping. Located at http://marketplace.secondlife.com. (Many freebies available)
Freebie: An item you can purchase or take for free
Dollarbie: an item you can purchase for L$1 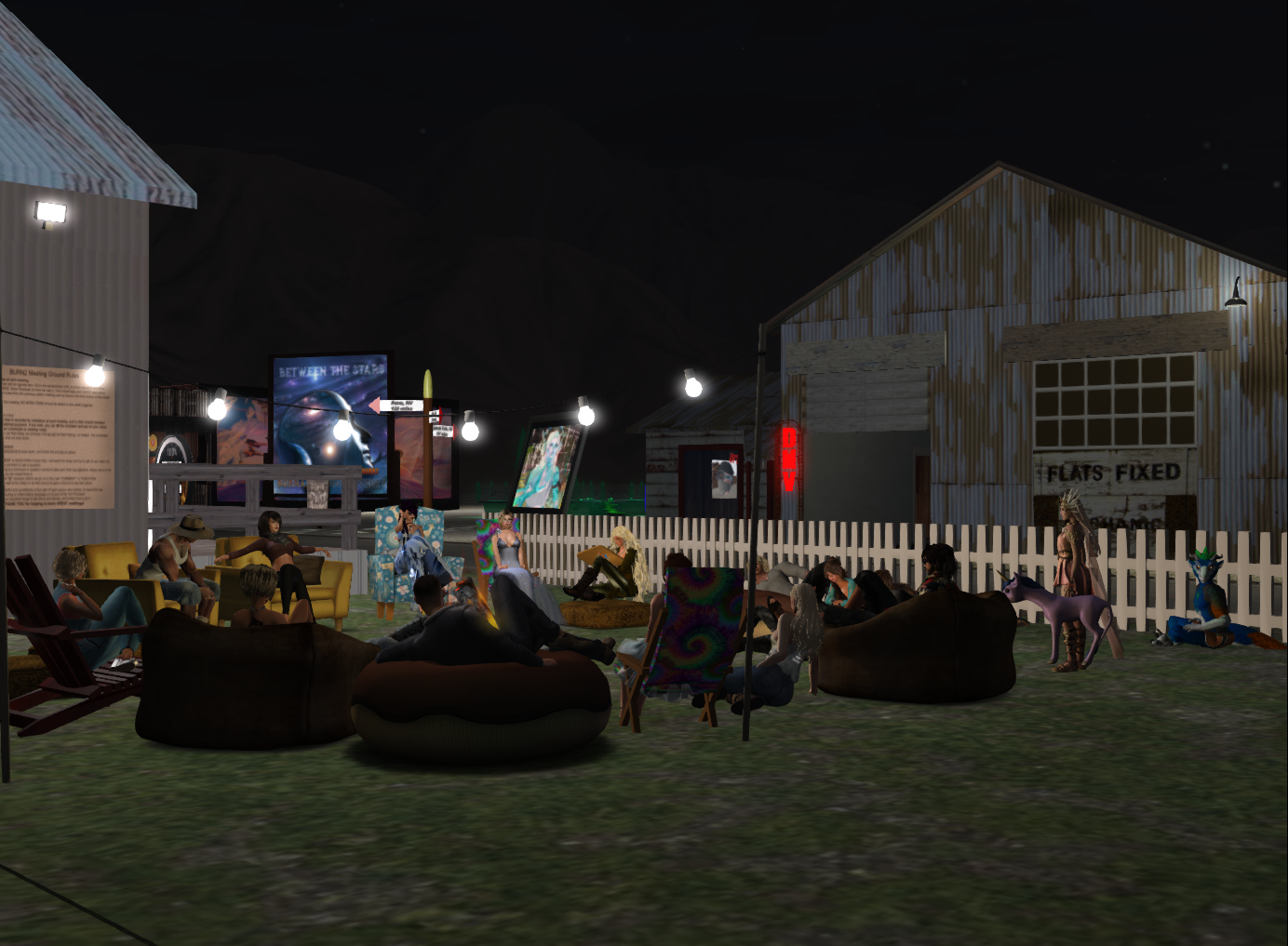 Below are some useful video tutorials to get you started in Second Life. See you on the virtual Playa!

How to Sit, Chat, Pose, and Walk with Your New Avatar

For New Users in Second Life

How to Block Avatars and Objects from View

For When You Are Ready to Create Stuff: Building Basics!