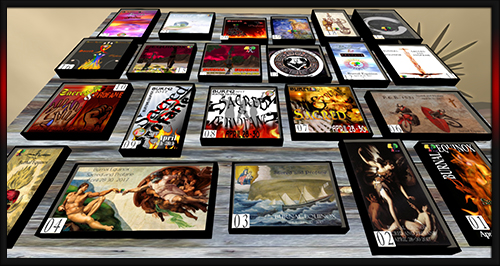 From noon SLT on Thursday the 23rd you can vote for your 3 favourite out of 22 (yes, TWENTY-TWO) poster submissions for this event’s contest! But hurry – voting CLOSES on the 29th March at 11:00pm SLT!

There’s quite a variety of choices – let’s review the theme, description and vision, then you have two ways to vote. Read on!

THEME: Sacred and Profane
DESCRIPTION: What does this mean? The sacred–profane dichotomy is an idea posited by French sociologist Émile Durkheim, who considered it to be the central characteristic of religion:

“Religion is a unified system of beliefs and practices relative to sacred things, that is to say, things set apart and forbidden.”

In Durkheim’s theory, the sacred represented the interests of the group, especially unity, which were embodied in sacred group symbols, or totems. The profane, on the other hand, involved mundane individual concerns. Durkheim explicitly stated that the sacred/profane dichotomy was not equivalent to good/evil. The sacred could be good or evil, and the profane could be either as well.

VISION: The sacred represents the interests of the group, especially unity, which is embodied in sacred group symbols, or totems. The profane, on the other hand, involved mundane individual concerns.

As you enter the playa you will see individuals here and there, alone, moving further in, pairs and couples, until finally at the far corner you reach the stage, a hive for activity and community. Paths leading in, are symbolic of heading to a sort of place/person of worship… yellow brick road. It is just an iconic path most would know and in terms of sacred, it went to the Emerald City to the home of the wizard who was like a spiritual leader, high-powered spiritual leader that was in the end, a mundane man.

Advantage of #1: You get to see the posters up close before you choose your 3 favourites. They are all up on a board in frames and numbered.

Advantage of #2: You skip that and go to the voting page, save time. But the pictures on the site are a bit small. If you already know which ones you will choose, this may be okay for you.

So, arise, go forth Burners, choose up to 3 of your favourite posters and VOTE! Results will be announced after the BURN2 Planning committee meeting next Thursday the 30th of March.