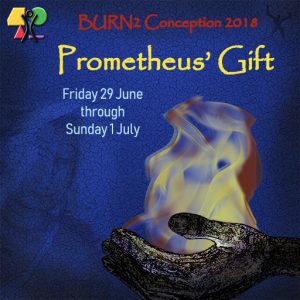 The inspiration for this theme came from the love of fire that is common to all of us Burners. The sight of a spark inspires us, a raging bonfire enthralls us.

But before fire inspired creativity, it gave warmth to our bodies and flavour to our food. And how did we get fire? We told each other many stories, different peoples everywhere creating various myths, handed down through the generations.

So many myths, so many stories. Fire stolen by gods, mankind or animals. It gives, and yes, it takes, life. Ancient Greek and Roman mythology, Etruscan, Egyptian, Chinese and Indian, Native Peoples. In some stories, fire was a gift; in others a stolen power; in still others a side effect of the actions of gods and goddesses.

Dragons and spirits, beavers and birds, demigods and even the gods themselves.

Hence is mentioned the coming of fire to humanity by way of a thieving, sympathetic Titan who pays dearly for disobeying the will of the gods. But this is just one story, and there are so many others – share the favourites that tell the “history” of how humanity came to master fire. You can even create your own story of fire and its arrival among mankind.

Fire, however it came to us, we see its dual nature as destroyer, and also creator, of life. We tell and re-tell the stories, and while we may understand more, and know more, it’s always good to look back, to remember the ways in which we once explained the mysteries of the world around us.