From the Virtual to the Real 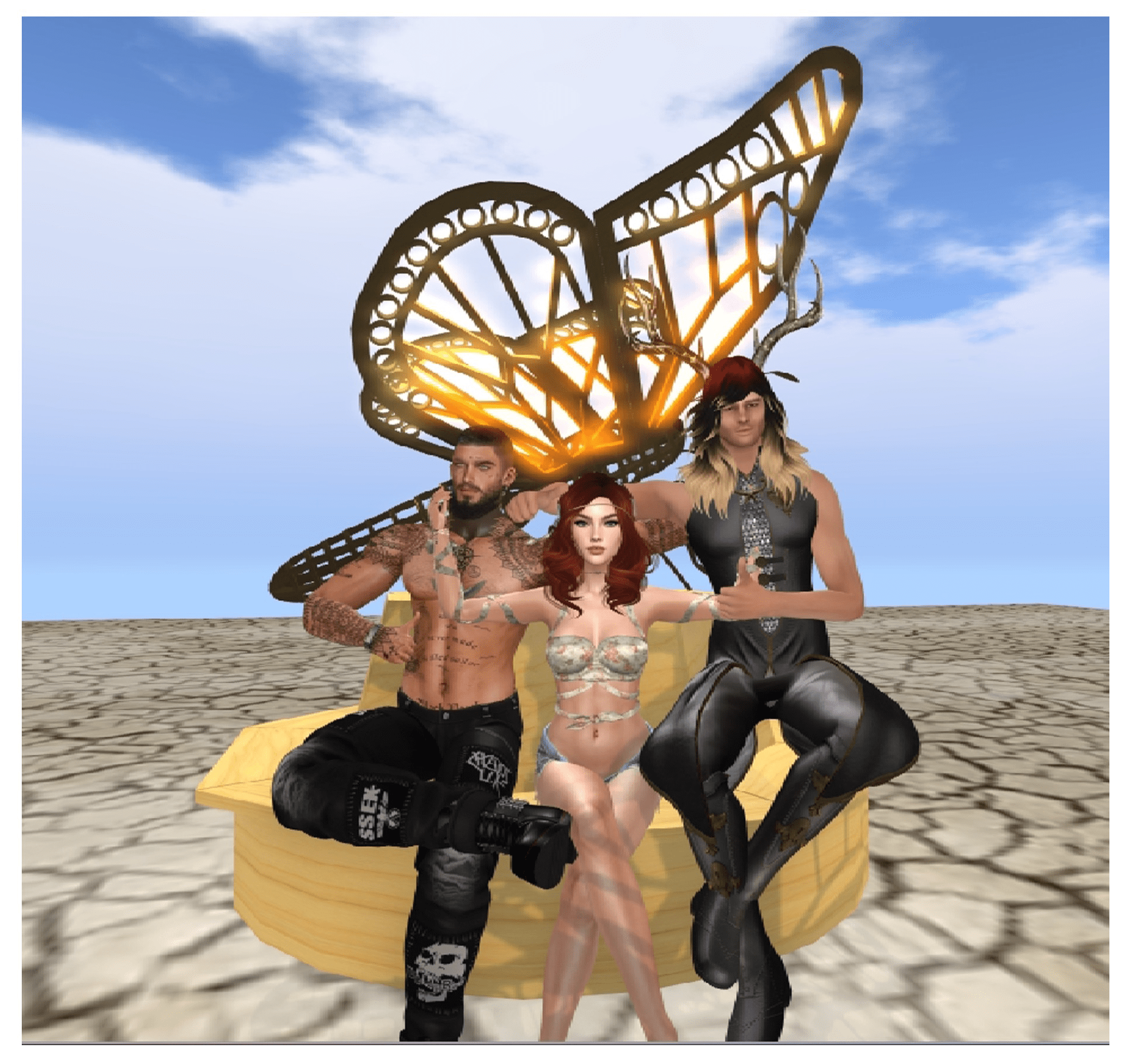 This spotlight starts with Lyric S. Heart. She created the original, beautifully made poetry garden in SL upon which the Metamorphosis build expanded to include a giant butterfly by Jeff Olhoeft. Jeff was inspired by Lyric's poetry to add the butterfly, and Magii came along to add his part to the project.

The result was Metamorphosis, the installation that appeared at Burn2's Octoburn event in 2021.

The story of these three people and how they came together to create Metamorphosis in the virtual world, then take it to the real world is inspiring.

First in the Virtual

Lyric used her time in COVID isolation to engage in her own spiritual pursuits; experiencing a spiritual transcendence as she observed the interconnectedness of the world. She engaged with these experiences during her many visits to a butterfly garden located near her home, and would often record her insights as poems inspired by her experiences in the garden. She began sharing her writings and was encouraged to share them with a broader audience by way of a poetry garden at the 2021 Octoburn event. The poetry garden had flowers and a walkway with butterfly benches to offer a place to sit and reflect.

She coordinated with her friend, Jeff Olhoeft, to join the project. Jeff, a sculptor and burgeoning SL builder, expanded the poetry garden to new heights by constructing a large Monarch butterfly atop a milkweed plant that would tower over the Playa at the 2021 Octoburn. He chose a milkweed native to Black Rock Desert.

The Octoburn 2021 build, Metamorphosis, included 8 poems inspired by Lyric's time at the butterfly garden during her COVID isolation. 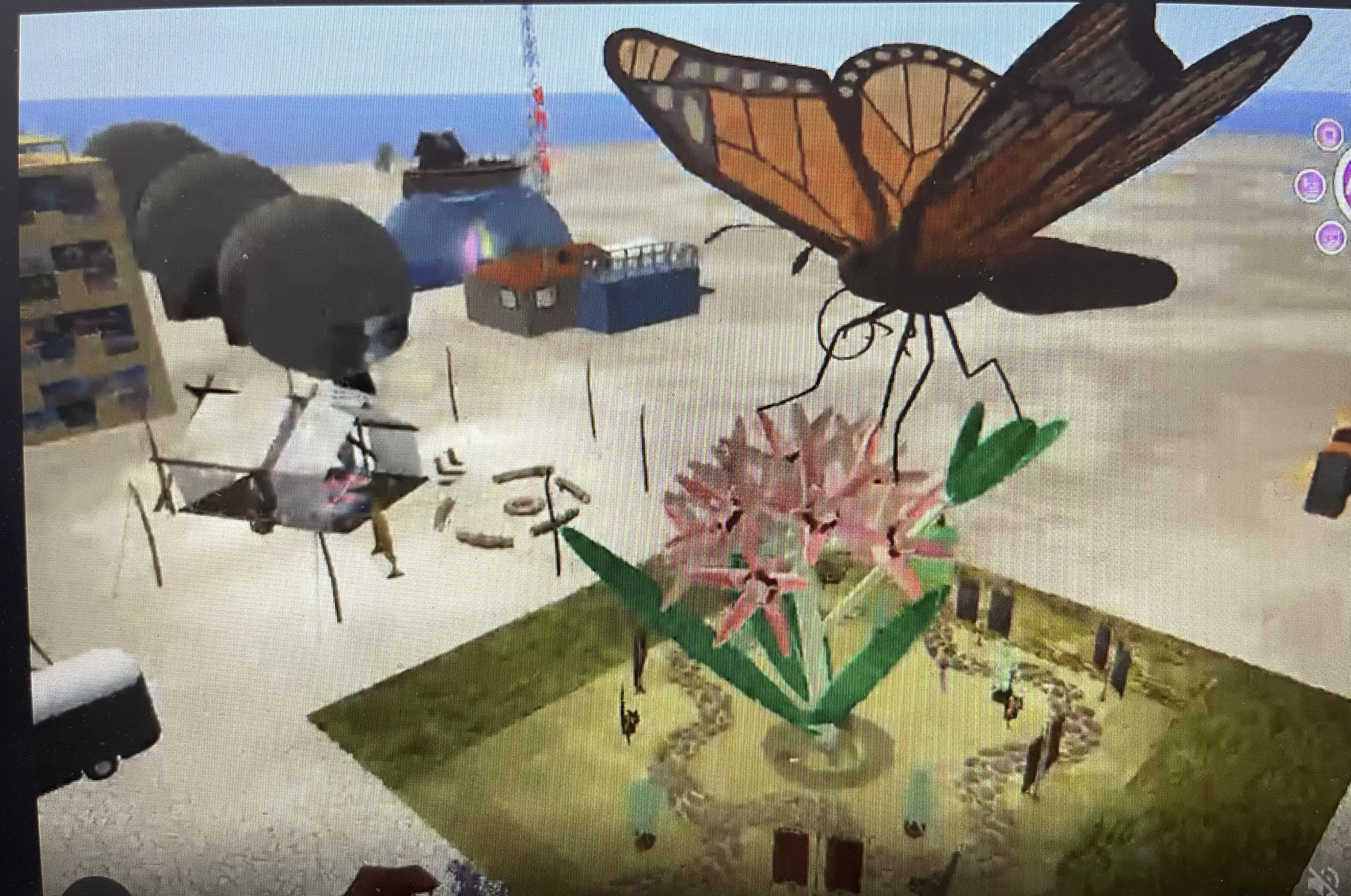 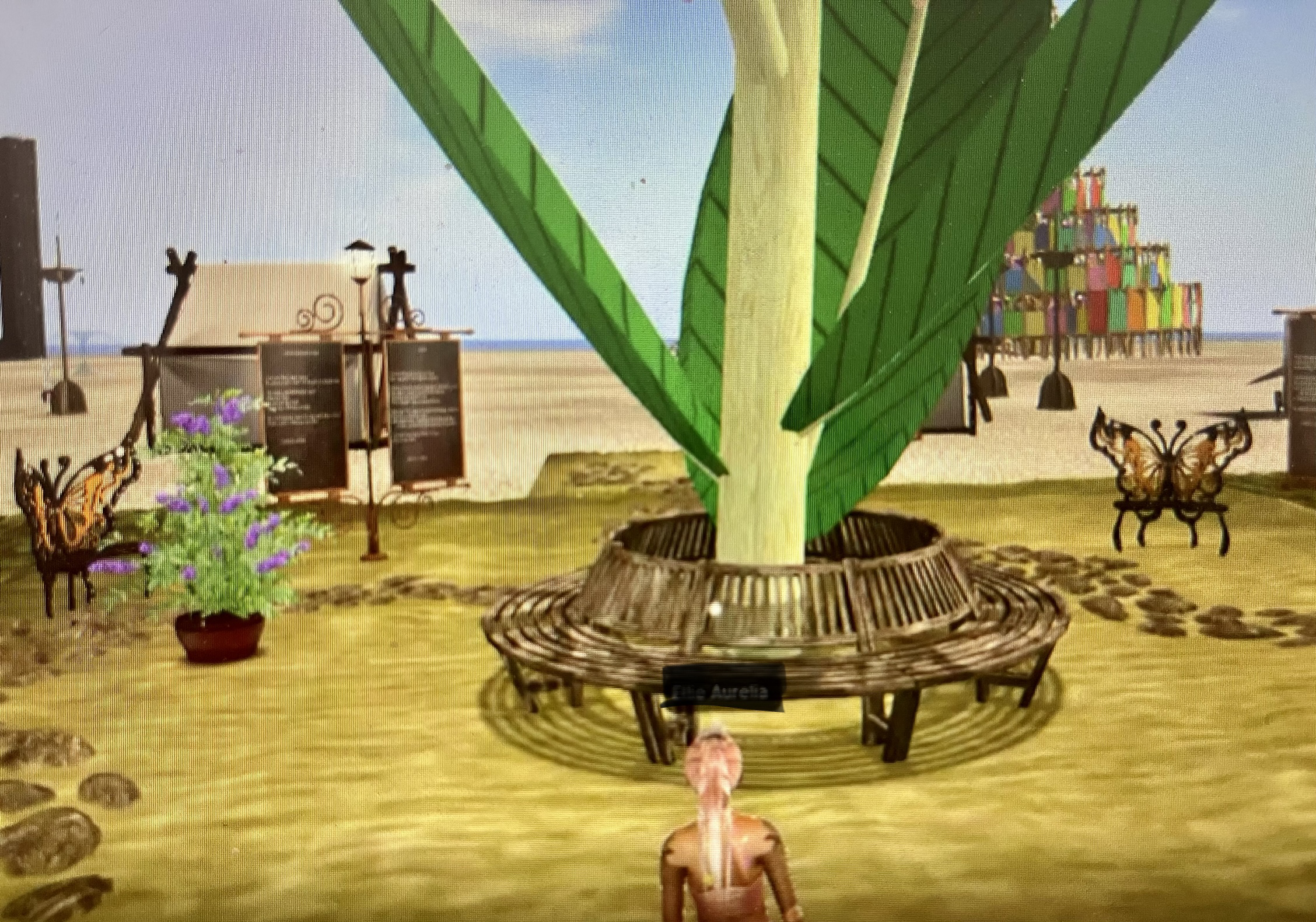 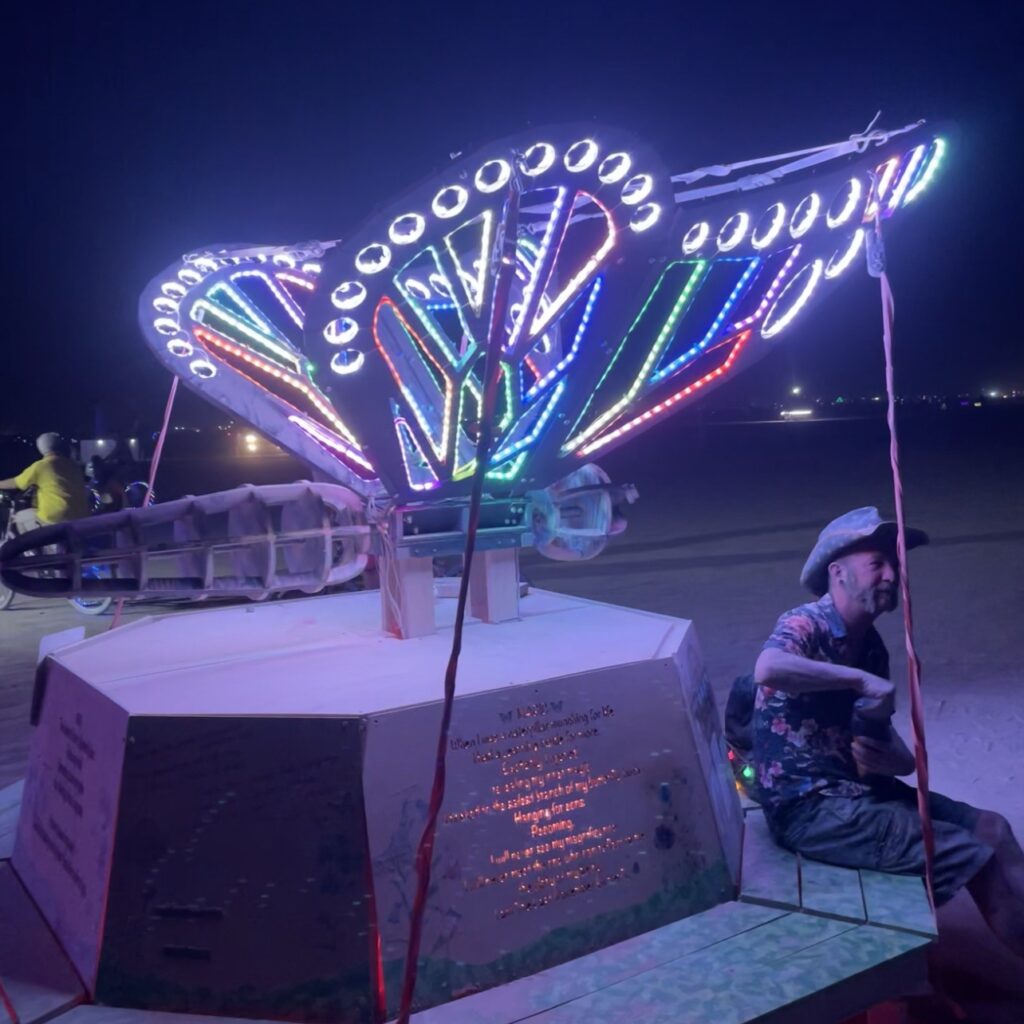 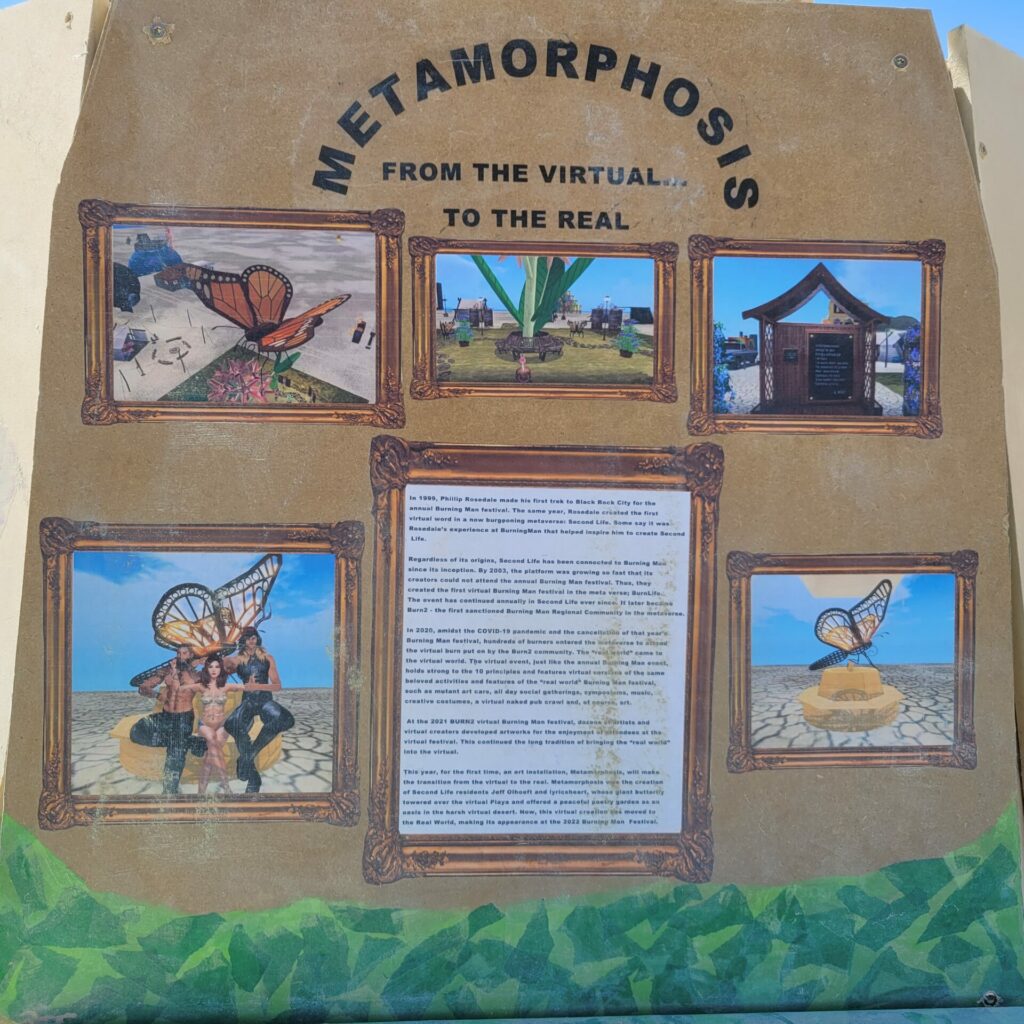 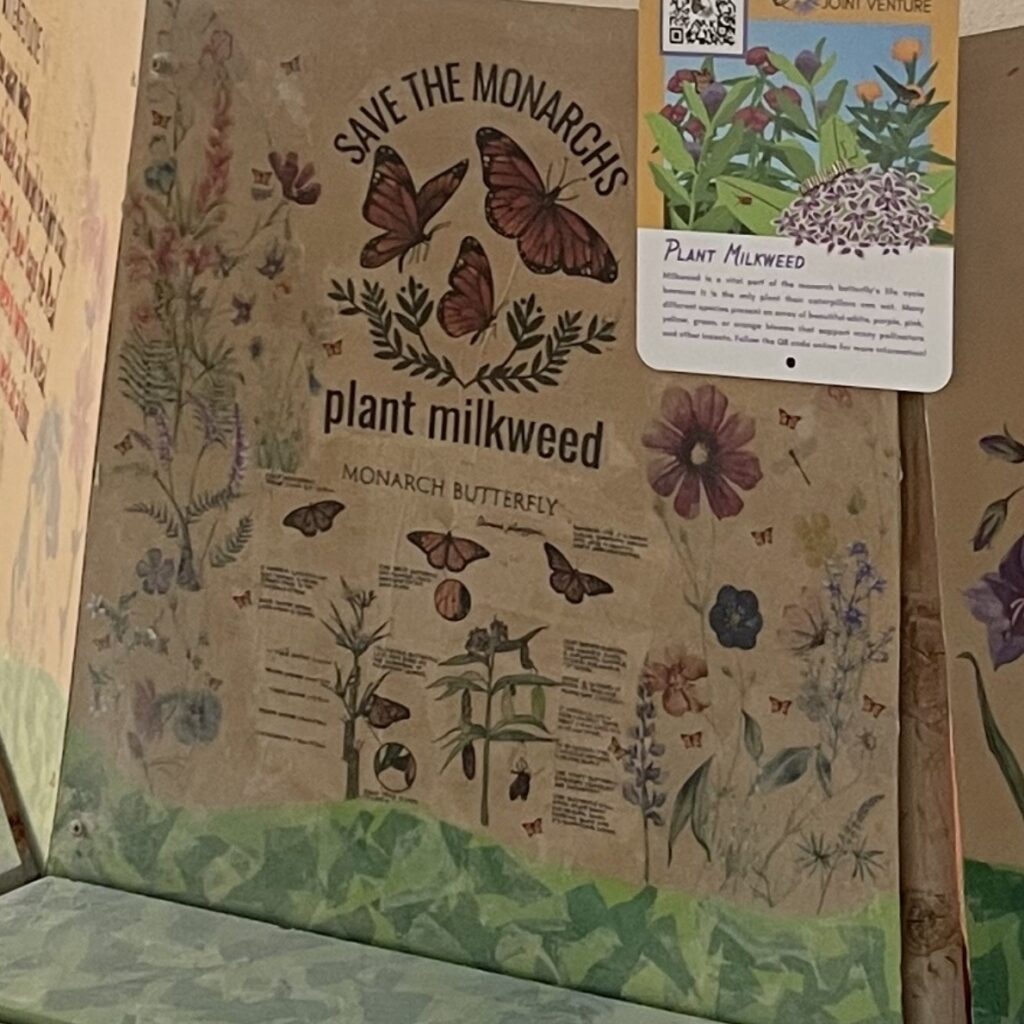 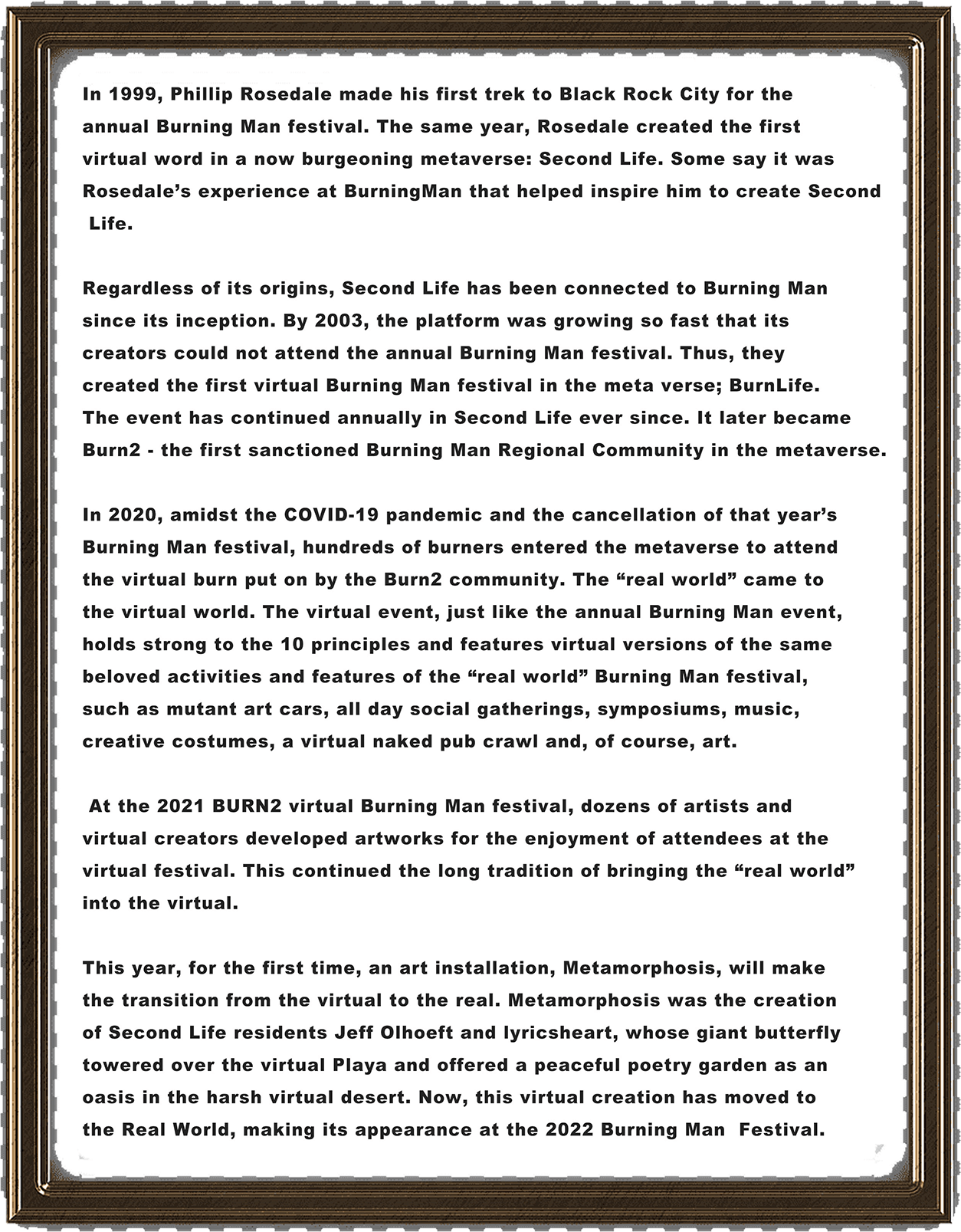 Then in the Real

At the time, there was no thought about taking this build to Black Rock City at all. For those not familiar, Black Rock City (BRC) is the temporary city in the Nevada desert that springs up every year for the 9-day Burning Man event.

3Vilyn and WickedTruth, both experienced Burners, told the trio that they thought the piece would translate well to an installation at BRC. This would be the first time at BRC for all three members of the Metamorphosis team. It is notoriously difficult to get tickets to BRC; especially for first-timers.

A team was put together with Wickedtruth taking the lead role in applying for Honorarium Grant. While other sanctioned regionals often have art pieces at BRC, Burn2 has not had such representation before. This was a unique opportunity. It is not uncommon for art pieces that are at BRC to subsequently be represented in the metaverse at one of the virtual events. But this was the first time that we know of that a piece intended for a virtual event was subsequently brought to the real world event.

The Honorarium grant was not awarded to them, but they decided to complete a self-funded, smaller version of their Metamorphosis art camp, which retained most of the original elements: the butterfly, the poetry and flowers, and the bench for repose. The team incorporated a bench seat back with pictures and explanation of the ‘Virtual to the Real’.

The trio are grateful for the help they received. All three were going to BRC for the first time. 3V and Wickedtruth as well as their camp, Illumination Village, were indispensable allies in their efforts to bring the Octoburn piece to BRC. A friend of Jeff's contributed code for controlling the lights. Along with her poetry, one of the bench backs had information about the Monarch Joint Venture nonprofit initiative, and Lyric gave out milkweed seeds to encourage people to plant them. Monarch butterflies rely on an abundance of milkweed.

The build attracted participants. At its location along the 3:00 Promenade, just past the Esplanade, the piece was in one of the most active spots on the playa. The bright butterfly was a beacon inviting visitors and the benches provided a rare and much needed spot for many visitors to rest and observe the playa at all angles. Community members expressed their delight with the beauty of the LED-lit butterfly, and many were moved by the poetry; inspiring some to even write poetry of their own on the bench, as they were invited to do so.

Reflections on the Experience

Would they do such a project again, bringing an installation from virtual to real? The answer was an immediate "yes," even with the challenges of being first-time Burners and not fully knowing the hurdles the Playa can present. If inspired by an idea they want to share with the community, they would definitely do it.

To other virtual Burners considering taking virtual art to BRC, this is their advice: Start early, start small, expect that you will have to improvise, and don't let perfection be the enemy of the good.

Here are some additional thoughts from the Metamorphosis team.

Whether it is next year or the year after, we would love to bring out another art piece to BRC. It is challenging, but it is an incredibly rewarding experience. The same is the case for SL. Frankly, inspiration is required just the same for an SL build as it is for a BRC build. But it is "easier" to bring a piece to SL, as you are not constrained by the natural elements as you are at BRC and you don't have near the logistic considerations as you do for the BRC installation. Also, the cost to create an SL piece is far far less. Depending on the complexity of the build, the time commitment for an SL piece may also not be as big as a piece for BRC.

It is easy to see how Lyric's poetry, like milkweed, attracted Jeff's butterfly, and we see a metamorphosis from virtual to real. The following poems by were two of the six that were featured in the build at Black Rock City. 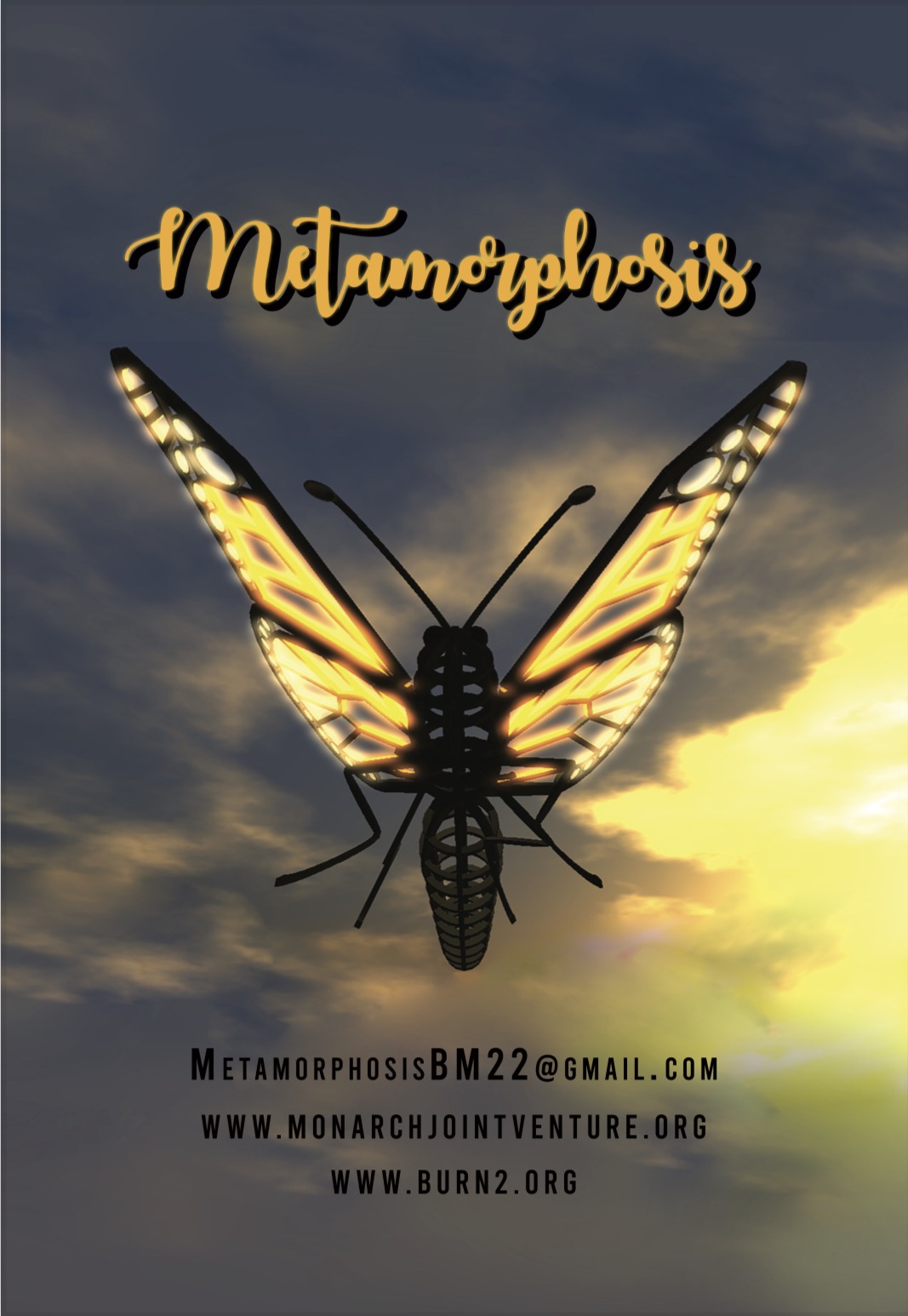 The faintest flutter of butterfly love

Spreading down my spine

You, thinking of me, I suppose.

Hopium pulses in my veins
Warmth spreading until my heart finds the rhythm of you.

This butterfly being butterfly

Flips and dives its way to nectar

Lit up my day

Lyric joined SL in 2009 and has been an active resident ever since. She first participated in Burn 2 Octoburn in 2020 and, in 2021, had an art camp, Metamorphosis, with Jeff O at the Octoburn event. She has been active in the Burn 2 community as a greeter since 2020. Her first year to attend the Burning Man event at BRC was 2022.

Jeff Olhoeft joined SL in 2020 and first participated in the Octoburn that same year. He has been active in the Burn 2 community. He has built effigies for several Burn2 events, and had the Metamorphosis art camp with Lyric at the 2021 Octoburn. 2022 was also his first time to BRC.